U.S. Rep. Tony Gonzales, a Texas Republican, stood next to the future Speaker of the House during a press conference on Tuesday at the U.S.-Mexico border in Texas and called for the resignation of Homeland Security Secretary Alejandro Mayorkas.

Gonzales, a veteran, represents a district in Texas that spans over 800 miles along the border that is porous and notorious for illegal immigrants entering the U.S.

To help shed light on the illegal immigration issue, Gonzales said he has hosted 16 border trips with officials.

Just this year, over two million migrant encounters have taken place, and he said he has been urging the Biden administration to work with the House Republican leadership to secure the border.

‘Our border is wide open, and people are dying every single day,’ Gonzales said. ‘These are discussions I wish we would have in Congress. But it starts somewhere.

‘Change is coming,’ he added. ‘That change is now. That change does not happen without those that are willing to roll up their sleeves and fight for it.’

Just before Gonzales stepped up to the podium, Representative Kevin McCarthy called for the resignation of Homeland Security Secretary Alejandro Mayorkas.

McCarthy said the secretary claims the border is secure, yet he has blocked I.C.E. and Border Patrol agents from doing their jobs.

‘His actions have produced the greatest wave of illegal immigration in recorded history,’ McCarthy said of Mayorkas. ‘Our country may never recover from Secretary Mayorkas’ dereliction of duty.’

Gonzales was also joined by Congressman Dan Crenshaw, a Republican, who said the Border Patrol agents have had over four million encounters with illegal immigrants since Biden took office, and ‘he doesn’t care.’

Crenshaw said the cartels are just on the other side of the border, calling it a national security crisis, and they ‘flood’ the U.S. with ‘deadly Fentanyl.’
‘They’re at war with us, and we do nothing,’ he said.

Gonzales won re-election to another two-year term in Congress by earning just over 17% more votes than his opponent, Democratic candidate John Lira.

One of the issues Gonzales ran on was securing the border, and since taking office, he has introduced legislation to end catch-and-release, increase funding for local law enforcement agencies along the border, and eliminating measures that keep Border Patrol agents in processing centers rather than on the frontlines.

‘Change is coming,’ he said on Tuesday. ‘Change is going to be led by the people standing right here.’ 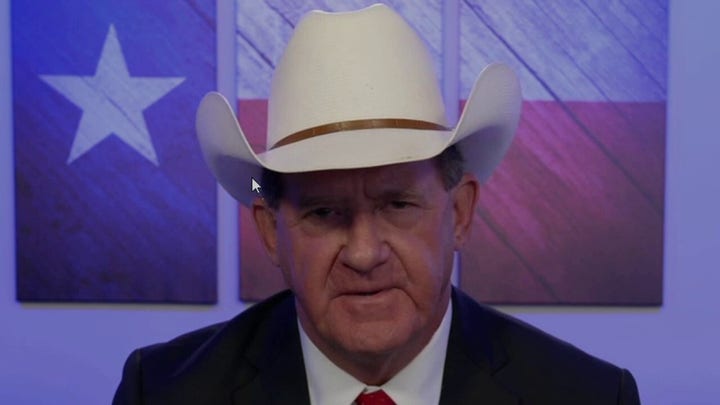 United Airlines stock has a 50% upside from here: Morgan Stanley