The number of migrant encounters under the Biden administration have been dwarfing the definition of a ‘crisis’ set by President Barack Obama’s former Homeland Security chief — just as DHS is predicting that the numbers are set to soar even further once Title 42 ends next week.

Jeh Johnson, who served as Homeland Security Secretary between 2013 and 2017, said in 2019 — when the Trump administration was facing a border crisis — that 1,000 crossings a day marked an overwhelming number when he served in office.

‘On Tuesday there were 4,000 apprehensions. I know that 1,000 overwhelms the system and I cannot begin to imagine what 4,000 a day looks like, so we are truly in a crisis,’ he said.

In Fiscal Year 2022, there were more than 2.3 million migrant crossings, topping the already historic 1.7 million in FY 21. That FY22 number averages to approximately 6,500 a day. While that includes repeat crossings (which are higher due to rapid Title 42 expulsions) it is clear that authorities in many areas have been overwhelmed. Fox News reported this week how migrants are being dropped off on street corners in El Paso due to a lack of space.

So far in FY 23, that number has been on pace to outdo the last two fiscal years, with over 500,000 migrant encounters already since October. There are fears that number may rise significantly in the days ahead as Title 42 — a public health order that allows for the rapid expulsion of migrants at the border since March 2020 — will end due to a court order.

Republicans, Democrats and the administration have all expressed concern that migrant numbers will increase once the order drops and migrants believe they have a greater chance of being released into the U.S.

The Biden administration has made a $4 billion request for extra funding at the border based on a ‘flow estimation’ that predicts between 9,000 and 15,000 migrant crossings a day once Title 42 ends. 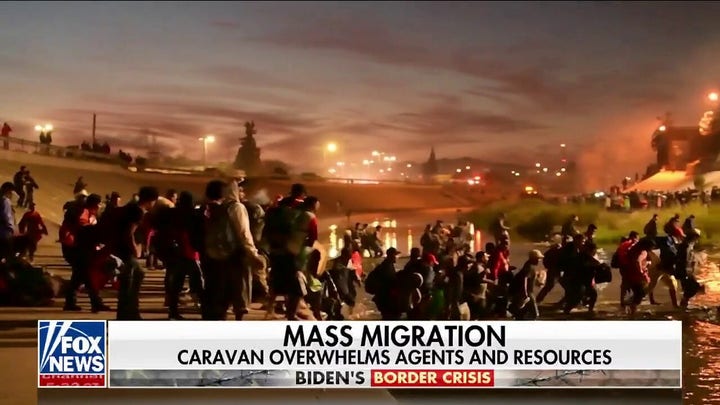 The Biden administration has refrained from specifically calling what is going on at the border a crisis, although DHS Secretary Alejandro Mayorkas has said that ‘the entire hemisphere is suffering a migration crisis.’

‘We are seeing an unprecedented movement of people from country to country. It is not restricted to the southern border,’ he said at a congressional hearing last month.

DHS has said it has a six-point plan in place to deal with a surge after Title 42. That plan includes an increase in resources to the border, greater cooperation with Western Hemisphere countries, and an increased use of alternative enforcement mechanisms such as expedited removal.

The $4 billion funding request would fund ‘border management’ and DHS would use it on soft-sided facilities, migrant care, transportation, processing, and the Emergency Food and Shelter program. In an interview Tuesday during a visit to El Paso, Texas, Mayorkas said that his agency’s approach is multi-faceted.

‘We’re mindful of the fact that Title 42 is going to end early next week,’ Mayorkas told The El Paso Times. ‘We’re also mindful of the fact that we have to coordinate with our partners, not just the nonprofit organizations with which we work very closely, not just cities along the border like El Paso, but also our international partners. So we’re moving as quickly as we can.’

Meanwhile, the White House is urging Republicans, who have been critical of the Biden administration’s approach to the southern border, to agree to the funding request.

‘If Republicans in Congress are serious about border security, they would ensure that the men and women of the Department of Homeland Security have the resources they need to secure our border and build a safe, orderly, and humane immigration system,’ White House Assistant Press Secretary Abdullah Hasan told Fox News Digital.