An LGBT advocate claimed during a House of Representatives hearing that transgender people ‘detransitioning’ is not ‘a real thing.’

During Wednesday’s House Oversight Committee hearing on anti-LGBT violence, Jessie Pocock, the CEO and executive director of Inside Out Youth Services, made the claim in response to a question from Texas Rep. Michael Cloud, a Republican, about formerly transgender people who have detransitioned.

‘I can’t really speak to individuals’ personal experience. You know, someone’s gender is just a really personal experience, but I can tell you, I’ve been in this work a long time, I know a lot of trans folks, close friends, family members,’ Pocock said.

‘And I’ve just never heard of a case of anyone detransitioning, so I honestly don’t think it’s a real thing.’

Cloud pushed back on Pocock’s claim, saying, ‘There’s a number of cases in the news right now’ showing people detransitioning from being transgender.

‘And the concern that parents have is we’ve all had awkward teen years where we’ve questioned things and existence and a lot of things. And the question is kids who are maybe making a permanent decision even without the input of their parents and making irreversible decisions,’ Cloud said.

‘There’s some who’ve talked about they can’t have kids anymore, and they wish they could in a lot of cases. And I’m curious on how we’d work to protect kids. I wish we had more time because I think this is an important issue to get into, but thank you for being here.’

In its values that form an acronym for ‘INSIDE OUT,’ the organization lists ‘intersectionality,’ ‘openness’ and ‘engagement.’

Other values listed by the organization include ‘dancing/dance,’ ‘nourishment’ and ‘unicorns.’

There have been many cases of formerly transgender individuals detransitioning back to their original genders, but often with permanent damage to their bodies.

Chloe Cole, an 18-year-old former transgender child who was on hormone blockers at 13 and had a double mastectomy at 15 before detransitioning a year later, offered to travel to Washington to ‘clear up any confusion.’

‘Detransitioners are pretty used to being told that they don’t exist,’ she tweeted Wednesday. ‘I don’t mind coming to DC to clear up any confusion lol.’

Prisha Mosley, who is detransitioning after a double mastectomy at the age of 18, talked about her struggles in an interview with ‘America Reports’ last week.

‘One of the issues I have is the lack of identity,’ Mosley explained. ‘And, on top of not having a lot of friends and having issues at home, when I found the trans community and found a new identity and was affirmed … that’s what caused me to transition.’

Mosley cited her mental health condition and manipulation from therapists and doctors for her decision to transition at such a young age. She said her parents were also manipulated into supporting the gender change.

‘I was manipulated not only by my trans peers, but by my gender specialist, the person who gave me my letter of recommendation in surgery. It was all sold as like a wonderful thing,’ she said.

‘It wasn’t like a medical condition that you needed to be treated that was sad or serious. It was like a fun thing like you’re trans now and it’s celebrated and you’re wonderful and you’re a hero and all of that. And, you know, that attention is what I was looking for.’

Additionally, a retired Navy SEAL who came out as transgender a decade ago before announcing his detransition in recent days spoke out to Fox News about the process and why children should not rush or be rushed into making a life-altering medical decision.

Chris Beck, who had for a time been known as Kristen Beck, told ‘Tucker Carlson Tonight’ Monday he is not at all political, nor is he opposed to or critical of transgender people. He told host Tucker Carlson he wants potential transitioners to ‘slow down’ and for doctors to get a full grasp of what they are doing. 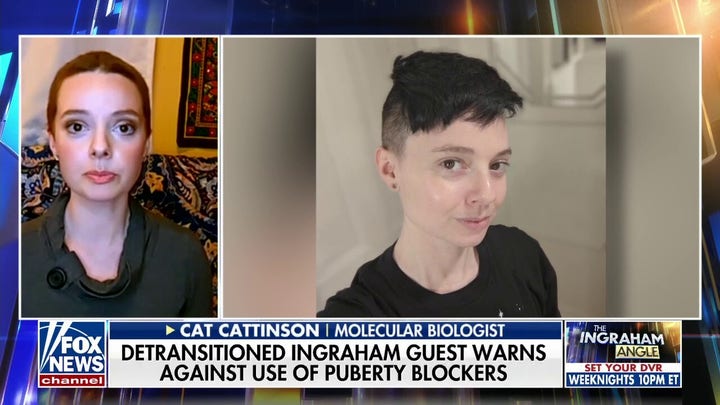 ‘The transgender [issue] originally started out as pretty basic and very rare. And now it’s kind of morphed into an ideology,’ Beck said.

Beck criticized the idea that doctors are in some places allowed to overrule parents and go forward with transitioning surgeries or pharmaceutical prescriptions, calling it a major problem.

He claimed psychology manuals have essentially ‘gotten rid of’ terminology like ‘gender dysphoria’ or placed the issue under the umbrella of mental health.

‘And now, as soon as somebody goes in there and says [they want to be] transgender, you’re basically labeled transgender, and they start pushing your surgery,’ Beck said. ‘That’s what I’m trying to stop because [there are] a lot of gay people out there who are transgender but not transgender in everything.’