FIRST ON FOX: A group of House Republicans, led by Rep. Lance Gooden, R-Texas, are calling on three NGOs that work with migrants at the U.S. southern border to preserve documents and communications related to their operations – as they eye investigations into the movement of illegal immigrants into the U.S. interior.

‘The Biden administration is circumventing the security and safety standards federal agencies must uphold by allowing NGOs to harbor, transport, and encourage unauthorized aliens to resettle in the United States,’ they write.

They accuse the NGOs of ‘violating federal law and regulation, placing migrants and American communities at risk, and subjecting local communities to unreasonable burdens.’

While the role of NGOs in aiding migrants who have crossed the southern border predates the Biden administration, their role has come under greater scrutiny amid a historic surge at the southern border, which saw more than 2.3 million migrant encounters in FY 2022 alone.

FY 2023 is so far on track to exceed that number, and there are fears of an even greater surge once Title 42 ends in the coming days, with many of them being released – often into the care of NGOs who provide the migrants with supplies and often help with travel to their destinations.

DHS Secretary Alejandro Mayorkas said this week that the end of Title 42, which DHS predicts could lead to up to 14,000 migrant crossings a day, will require even greater cooperation with NGOs.

12.14.22 – Letter to Catholic Charities on Document Preservation by Fox News on Scribd

‘We’re mindful of the fact that Title 42 is going to end early next week,’ Mayorkas told The El Paso Times. ‘We’re also mindful of the fact that we have to coordinate with our partners, not just the nonprofit organizations with which we work very closely, not just cities along the border like El Paso, but also our international partners. So we’re moving as quickly as we can.’

But the Republicans object to what they believe is the use of taxpayer funds that go to NGOs to fund the movement of illegal immigrants into the U.S. interior.

‘Taxpayers should not be subsidizing any organization facilitating the movement of illegal immigrants across our border,’ they say in the letters. ‘When NGOs transport unauthorized aliens into the nation’s interior, it becomes increasingly difficult for federal immigration enforcement agencies to monitor their whereabouts and protect our communities.’

The GOP will take the House in January and its leadership has said it intends to investigate many aspects of the Biden administration’s handling of the crisis at the border. The lawmakers on Wednesday said they want the use of NGOs to be investigated as well.

‘Next Congress, we will continue to investigate your organization’s role in facilitating the border crisis, your potential violations of federal law, and your misuse of taxpayer funds,’ they say.

Specifically, they request the preservation of documents related to expenditures for reimbursement from the federal government.

‘It’s past time for investigations into the corrupt network of NGOs who are aiding and abetting illegal migration and human smuggling,’ Gooden said in a statement to Fox News Digital. ‘House Republicans plan to hit the ground running next Congress and these organizations need to know their tax-exempt status and ability to operate have been put on notice.’

In a statement posted to its website, Catholic Charities USA said it was ‘incredibly disturbing’ for the charity – the domestic humanitarian arm of the U.S. Catholic Church – to be accused of violating federal law and fueling the increase of migration across the border.

‘These accusations are both fallacious and factually inaccurate. Our life-saving humanitarian work neither violates federal laws nor endangers communities,’ the organization said. ‘The federal government is fully responsible for maintaining the U.S. border and determines who enters the country.’ 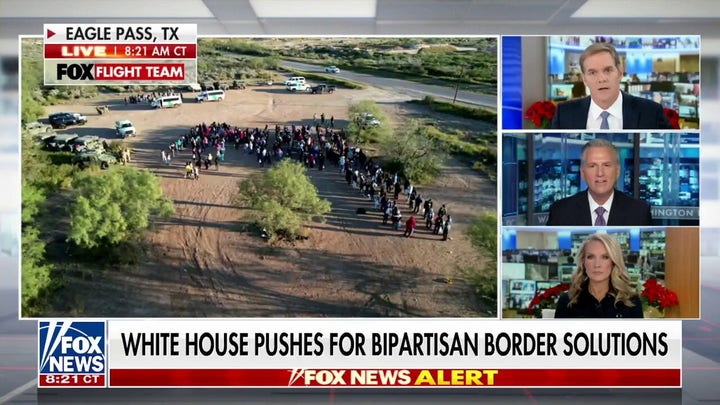 The organization said that its humanitarian assistance – including food, clothing and overnight shelter – is provided legally and begins only after a migrant has been released by the federal government. Without that help, the charity said, migrants would be on the streets.

‘Let us be clear. The U.S. immigration system is in dire need of reform; Catholic Charities and all those agencies and individuals responding to this national crisis are operating within a broken system,’ it said. ‘We urge all Americans to ask the administration and their congressional representatives to act on this important issue, as we have done.’

The letters come a day after Gooden spoke at a Heritage Foundation event, in which the think tank unveiled new data it says showed that NGOs had helped facilitate the transport of illegal immigrants to 431 congressional districts out of a total of 435.

Mike Howell, director of the Heritage Foundation’s Oversight Project, described the operation as a ‘mass resettlement program in which the Biden administration works hand-in-hand with NGOs.’

‘It affects the entirety of the United States,’ he said.

Meanwhile, Texas Gov. Greg Abbott on Wednesday announced that he is calling on the state Attorney General’s Office to ‘investigate the role non-governmental organizations may have played in planning & assisting illegal crossings into Texas.’