President Biden’s past week was riddled with controversy, including a halt of domestic flights due to an FAA system failure, his administration’s recommendation of a gas stove ban, the discovery of classified documents from his time as vice president and the launch of multiple federal investigations into his mishandling of important government materials.

Here is a look at the 80-year-old president’s latest struggles.

The discovery of classified documents

The White House Counsel’s Office confirmed last week that three batches of classified materials from Biden were recovered: one at his Washington, D.C., think tank, the Penn Biden Center, in early November and two at his Wilmington, Delaware, property.

The news of the first batch of documents broke Monday, which detailed how the documents were recovered by Biden’s lawyers at the Penn Biden Center days before the election.

The news of a second batch of classified documents found in Biden’s Wilmington, Delaware, home broke Wednesday. Biden’s son, Hunter, who is under federal investigation for tax fraud, claimed in emails he owns the Wilmington house where additional classified documents from Joe Biden’s vice presidency during the Obama administration were discovered.

‘Because I have a security clearance, I went to Wilmington Thursday evening to facilitate providing the document the president’s personal counsel found on Wednesday to the Justice Department,’ Sauber said in a statement Saturday. ‘While I was transferring it to the DOJ officials who accompanied me, five additional pages with classification markings were discovered among the material with it, for a total of six pages. The DOJ officials with me immediately took possession of them.’

Biden claims he does not know what the documents contain because his lawyers advised him not to ask. According to the White House, the documents were turned over to the National Archives. It is unclear when these documents were placed at the two locations and if there are more to be recovered.

The launch of a special counsel investigation

The Justice Department had been investigating the matter but elevated it to a special prosecutor after the recovery of a second batch of documents was revealed. Garland chose Robert Hur, a former U.S. attorney, to head the investigation.

‘The new year is off to a rough start for President Biden,’ Sopo told Fox News Digital. ‘Whatever bounce he may have had from the GOP’s lackluster midterms and the drawn-out speaker election may be dissipating. The timing of the classified documents controversy is especially bad for him in light of his rumored 2024 announcement since it neutralizes what was going to be one of his primary lines of attack against former President Trump.’

The new Republican majority in the House unifies to pass agenda

The Republican majority passed a bill Monday to cut back $72 billion in funds to hire tens of thousands of IRS staff over the next decade.

The White House announced Monday it would oppose the bill, which it claimed empowers the wealthy class to dodge taxes. 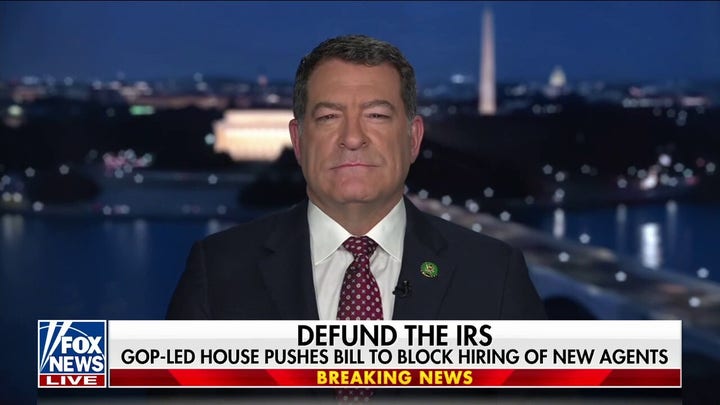 ‘Far from protecting middle-class families or small businesses, H.R. 23 protects wealthy tax cheats at the expense of honest, middle-class taxpayers,’ the White House said in a statement. ‘With their first economic legislation of the new Congress, House Republicans are making clear that their top economic priority is to allow the rich and multibillion-dollar corporations to skip out on their taxes, while making life harder for ordinary, middle-class families that pay the taxes they owe.’

The House is set to take up a vote on another tax bill that would abolish the IRS and eliminate the national income tax, a move the White House said it ‘adamantly opposes.’

House Republicans passed a resolution Tuesday to establish a new Judiciary subcommittee that will oversee how the executive branch investigates and collects information on American citizens. The Select Subcommittee on the Weaponization of the Federal Government will be led by Rep. Jim Jordan, R-Ohio, who will also chair the Judiciary Committee at-large.

House Republicans passed another bill Wednesday, the Born-Alive Abortion Survivors Protection Act, that requires immediate medical attention for babies who are born alive after a failed abortion. Democrats criticized the bill as an interference in women’s health care.

‘House Republicans passed an extreme bill today that will further jeopardize the right to reproductive health care in our country,’ Vice President Kamala Harris tweeted about the bill. ‘This is yet another attempt by Republican legislators to control women’s bodies.’

House moves in bipartisan fashion to oversee handling of China

The House passed one key measure this week in bipartisan fashion that may undercut the foreign policy agenda of the Biden administration.

The House, in a 365-65 vote Tuesday, launched a new committee to examine U.S. strategic competition with China. The committee will investigate how the U.S. can compete with China’s growing economic influence and counter the communist country’s human rights violations.

‘While I do have concerns here after reading the resolution itself, I will be voting ‘yes,’’ Rep. Jim McGovern, D-Mass., said. ‘The Democratic Party has led the way in implementing efforts to monitor China’s compliance with international human rights and rule of law standards, and we will continue to do so here.’

The Federal Aviation Administration (FAA) paused takeoffs at airports nationwide for several hours Wednesday morning after its Notice to Air Missions System, which sends necessary messages to all pilots, crashed. The agency was able to fix the system, but not until after thousands of flights were delayed and canceled.

The agency, which has a $23.5 billion budget, runs under Pete Buttigieg’s Department of Transportation.

The struggles came weeks after Southwest Airlines canceled more than 15,000 flights during the holiday season as winter weather and internal issues caused a mass panic that left travelers stranded without their belongings.

Richard Trumka Jr., the chair of the Consumer Product Safety Commission (CPSC) and son of Biden’s late labor union ally, Richard Trumka, told Bloomberg this week that a ban on gas stoves was possible and ‘any option is on the table.’ But Trumka backtracked on the possibility after a wave of backlash.

‘Over the past several days, there has been a lot of attention paid to gas stove emissions and to the Consumer Product Safety Commission,’ Trumka said. ‘Research indicates that emissions from gas stoves can be hazardous, and the CPSC is looking for ways to reduce related indoor air quality hazards. But, to be clear, I am not looking to ban gas stoves, and the CPSC has no proceeding to do so.’

The suggestion of a gas stove ban followed a letter from 22 congressional Democrats to the CPSC to consider increased regulations of gas stoves, which they claimed cause a risk to consumers through ‘indoor air pollution.’

‘President Biden had a terrible week. From mishandling classified documents in his (or Hunter’s) garage, to his administration’s talk of banning gas stoves, to his too little too late border photo op, the president is reeling from one of the roughest weeks of his presidency,’ Steinhauser told Fox News Digital.

‘But what should we expect when an incompetent career politician with an incredibly corrupt family is elevated to the presidency? I don’t think this bad news is going away anytime soon.’